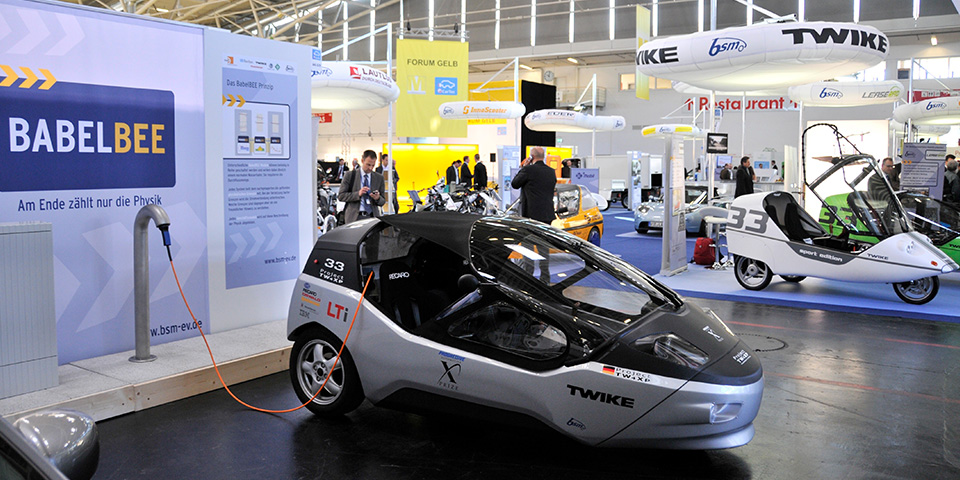 At this year’s IAA, the company TWIKE presents the project vehicle TWIKE 4, also known as “Project TW4XP” (Three-Wheeler for X-PRIZE), which won at the international competition “Automotive X PRIZE” for highly-efficient vehicles the third place among 136 competitors in its category. In 2014, the TWIKE 5, based on the TWIKE 4, is supposed to appear on the market. The TWIKE is a highly efficient, lightweight and intelligent vehicle concept that differs widely in appearance and handling of an ordinary car. At the IAA, the feedback of a car-loving audience will be warmly appreciated. Suggestions are actively requested and collected in order to integrate them into further development.

The TWIKE is a three-wheeled electric vehicle for two people and their luggage. Currently available is the TWIKE 3, which has been already delivered over 1.000 times worldwide. It is with a consumption of only 5 kWh/100 km unrivaled in its efficiency. The TWIKE reaches a top speed of 85 km/h and is therefore well suited as an everyday vehicle. The acceleration is remarkable as it boats an unexpected performance that often results in surprised facial expressions. Furthermore, this vehicle is a human power hybrid as it combines an electric motor with a pedal unit allowing the pilots to contribute, without any performance pressure, his fitness ambitions. Thus, a TWIKE includes the unique opportunity to improve your fitness during daily trips. Current TWIKEs reach a range up to 500km, depending on the battery size.

The TWIKE – A short review

The TWIKE resulted originally out of a student project. After receiving several awards at the World’s Fair in Vancouver 1986 and a following development phase, the first TWIKEs were delivered to the final customers. Meanwhile, more than 1,000 customer vehicles have covered a distance of over 60 million kilometers. Furthermore, the TWIKE shows its enormous efficiency – but also its performance regularly on racing and driving events. Some examples from recent years are the price efficiency of the e-miglia 2012, the first place at the WAVE 2011 and 2012 or the “range contest” victory at the eRUDA 2013. At this competition a TWIKE drove more than 500km based on pure electric driving without additional muscle force and without recharging the batteries. The applied batteries are standard ones and available as well for customers.

Although the TWIKE 5 occurs faster and more powerful than the TWIKE 3 it corresponds to the concept of TWIKE in general. The sporty hybrid drive belongs like the three-wheeler concept firmly to the “genes” of a TWIKE which are responsible for the unusual driving experience. Everybody who wants to contribute his point of view on the zero-emission speedster TWIKE is warmly welcome at the IAA, Hall 3.1/D35, 12.9 – 22.9.2013.