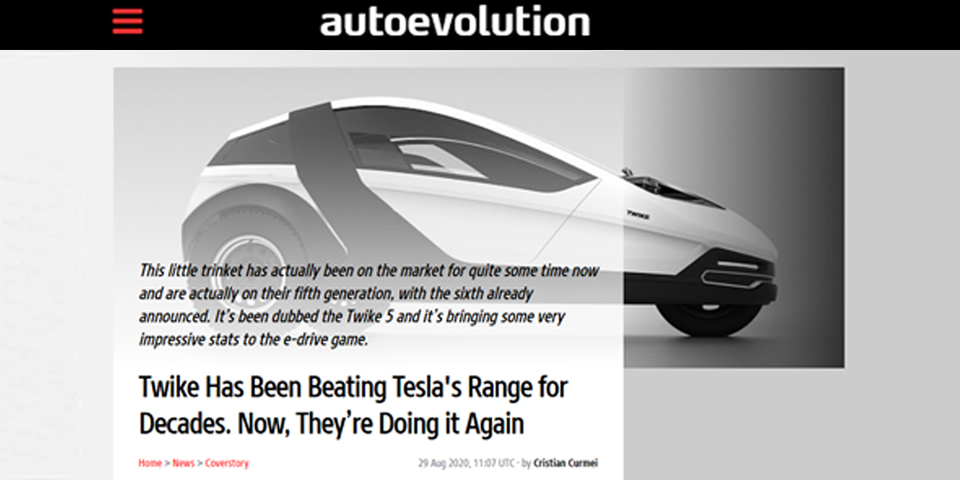 Please note: Our texts are translated automatically. Errors may occur during this process.

Just to get an idea of what we are dealing with, this is a vehicle that has been around since before I was born. Back in 1986, at the Vancouver World Expo, the Proto-Twike was unveiled, coming in with a weight of 110 lbs. (50 kg) and a top speed of 31 mph (50kph). This means that this design has been honed over 34 years and counting.

Back in 2000, when Elon Musk was learning to , the Twike was setting world records for the longest distance traveled in an electric production vehicle. Even back in 2013 when the Tesla Model S was beginning to hit the troad, the Twike out lasted Tesla by about 57 miles (92 km). Shhh. Nobody needs to know.

Finally, in 2019 the team felt ready to present their years of hard work and testing at the Geneva International Motor Show. But what makes this tiny vehicle so phenomenal? Let's find out, shall we?

We can start with the all-aluminum frame. This allows for the vehicle to be sturdy but also lightweight. History has taught us the importance of lightness in EVs and the Twike team is a master at this. They’ve been able to reduce the total weight of the car to a max of 1091 lbs (495kg). It's this extremely low weight and a few other technological advancements that make this EV so efficient.

The body design is also another point of focus. Here, let’s do a quick lesson in physics. Did you know that the shape a falling drop of water creates (in the time before it reaches terminal velocity) is the most aerodynamic structure possible? But it has to be falling backwards. I don’t know, something about fluid mechanics. Knowing this, look at the shape of the car. The outline creates an almost perfect resemblance to that shape. Musk must have missed this lesson, or he’s just playing it by the business book.

This shape influences all factors of the car, from top speed and range, to energy consumption, but then there’s the battery as well. This vehicle comes with one of four battery options, each with their own ability to affect top speed from 74mph (120kph) to 118 mph (190kph). The largest of which being a 30 kWh lithium ion battery.

Inside, however, the Twike hides a secret. To assist in recharging batteries, there is a pedal generator for both driver and passenger. This allows you to recharge the batteries while actively putting in your gym time. If you think that is odd, you obviously haven't heard of the steering system used.

We will not find a classic steering wheel in the car, but instead you’ll find two joysticks like the ones used for steering in aircraft, on each side of the driver. Apparently, it’s supposed to be a revolutionary steering method that offers little to no fatigue, even at high speeds. Nonetheless, this is a car, so suspension features and regenerative braking systems are onboard. But to also help control speeds, a downhill cruise control system also exists.

Come to think of it, this vehicle is a rather a super-fast three-wheeled bike, or trike. Oh, now I get it, trike, Twike. If you do happen to ever pick one up, your registration papers will categorize it as a three-wheeled motorcycle.