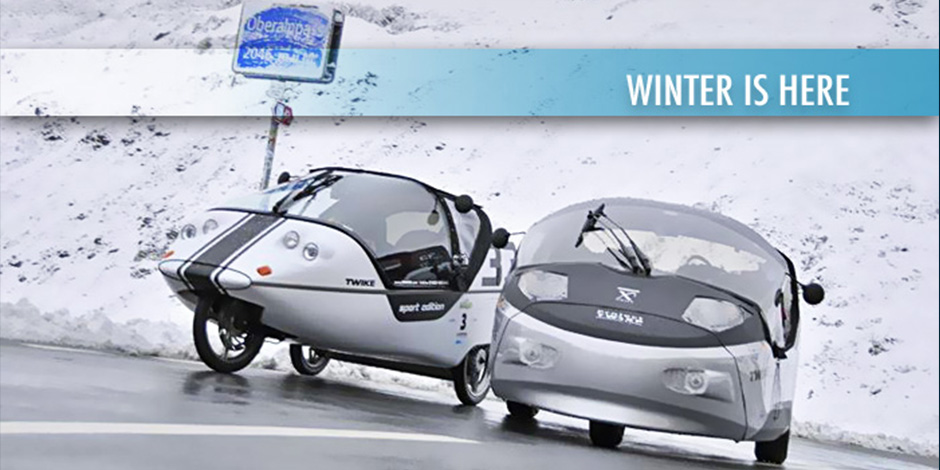 Of all the oddball green car concepts out there – and, there are a lot of ’em! – my favorite has to be the Twike 4XP. A human-powered hybrid, the Twike 4XP is a tiny urban runabout that you can pedal like a bicycle, but also drive around like an electric car. If you’re running low on juice, either physically or electrically, you can tap into the appropriate reserves and get home. It’s brilliant, in my never-so-humble opinion, and its most heinous emissions are easily controlled by avoiding Indian food. Still, today’s weather forecast called for “cold and freezing fog” here in Chicagoland, which didn’t sound promising for the little Twike.

Putting it another way: can you realistically drive a 4XP in winter?

Because life can always get a little better, I (sadly) don’t have a Twike to try out on icy roads. That means I had to ask, and the word from FINE Mobil GmbH (the manufacturers of the Twike) was that the little machine “is very suitable for driving on snow as well as on ice. Through the drive with a three-phase motor and due to the narrow tires, the ‘grip’ on snowy roads is very good – by accelerating and recuperating. However, the ‘soft’ snow height should not be more than the ground clearance.” Which makes sense, since the aerodynamically-shaped flat bottom would make it just a sled, at that point.

Here comes the technical explanation for the grip, courtesy, again, of FINE:

The three phase asynchronous motor accelerates the vehicle by increasing the engine speed by a fixed amount per unit of time, limited to a maximum power consumption. This control mechanism during recuperation (electric braking) acts in the same way that prevents indiscriminate spinning of the drive wheels and thus receives the traction capability of the vehicle. Thus, the Twike automatically has a kind of “anti – skid control” and a kind of “ABS” during electric braking. Traction on ice and packed snow is an ultimate experience of the Twike.

So, take that how you will, I guess. Do any of you have a Twike or enclosed Velo of your own? Have you driven it in winter? Let us know how that went in the comments, below.