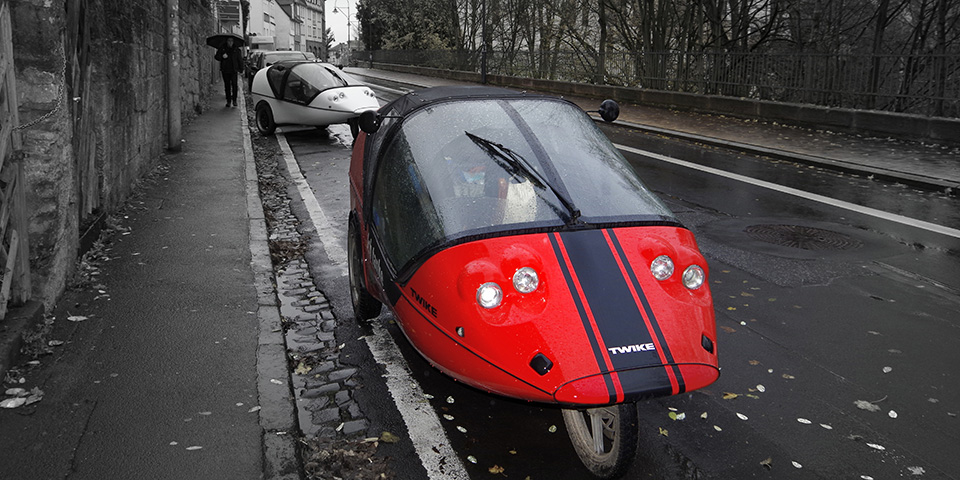 Hello, my name is Pedro Cavaleiro, I live in Süchteln, 20 km from the Dutch border and I would like to share with you TWIKE 1020 experiences.

Two times I had to visit unexpectedly the TWIKE Service Partners:
First: The on-board computer did not start
Second: Delamination of the plastic body from the frame

The first contact with a TWIKE was in Furtwangen in the Black Forest.
Since the test drive in February 2012 with Felix Duffner I wanted a TWIKE as a commuter vehicle.

My working place is in the Ruhr Area. Since the resulting commute is 140 km per day and my employer has no public charging point, it was always clear to me that the energy for the return trip had to be brought from home. As in April 2013 vehicles with 5 * 7,6Ah were offered I posted an offer for a new TWIKE.

Since the delivery July 2013, it is my preferred transportation vehicle for all kind of trips up to 300 km distance. For longer daily distances the TWIKE 1020 drives me to the main train station or to the airport. After an introduction phase of 6 months the former car was sold.

Near the Düsseldorf main train station the car parking Hagemann is a good address to park the TWIKE. The Park House doorman is a big fan of TWIKE 1020. The TWIKE must only turn into the driveway and the employer comes out of his office with a smile on his face and the RFID card in his hand to activate the charging point.

At Düsseldorf Airport especially at the car park P1 the TWIKE is not detected by the tollgate when you want to leave the parking. To leave the parking a doorman has to open manually the gate. The doorman at Düsseldorf Airport does not smile during the unlocking of the gate. The TWIKE driver does also not feel great joy at P1, because these processes can take up to 30 min.

Luckily in January 2014 in the car park P7 a new charging station was inaugurated. In this car park P7 the tollgate opens without waiting and the electric power provided by the “Stadtwerke Düsseldorf” is at the moment free of charge.

As you can realize TWIKE 1020 is primarily a working horse to reach my working places. During these trips, 3,014 kWh were consumed from my home plug. The average consumption is about 6 kWh / 100km, if a minor amount of not monitored external charges during long distance trips are neglected.

The raw data values used ​​for the calculations were collected at:
http://www.spritmonitor.de/de/detailansicht/587356.html
and give an good overview about driving profile and costs.

The 8.099,35 EUR of paybacks are mainly composed of km refund for buisnness trips and german tax refunds for commuting expenses. Unexpectedly I had to visit once the TWIKE service partner in Herten Jürgen Gaber and one time I visited the TWIKE Service in Rosenthal:

Both repairs were performed free of charge during the period of guarantee.

I would like to thank Jürgen Gaber from the for always finding solutions to perform the handover of TWIKE 1020 in an easy way. If needed even at weekend or during the night is was possible to park TWIKE 1020 in the garage of the Service Center Ruhrgebiet so that all periodic 10,000km inspections could be performed quickly.

I also would like to thank FINE Mobile GmbH for producing such a reliable traveling vehicle.