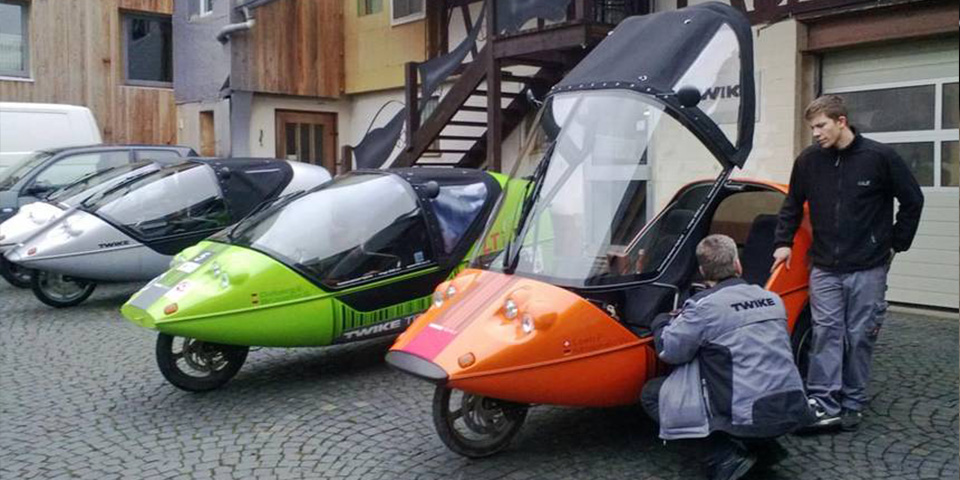 Search the internet for “human-electric hybrid” and you will see some prototypes of cars, and many attempts at powered bikes or enclosed scooters. But where is the dreamer’s sustainable vehicle: a weather-proof car that can carry two, compete with fossil-fueled traffic, and provide the opportunity to get a workout while extending our range?

Would it surprise you to learn that there is one such vehicle on the market, available for sale today, street legal in Europe and North America? And that this vehicle is approaching 20 years of road-proven use by hundreds of sustainable-vehicle fans who have made the leap to a completely new lifestyle with a human-electric hybrid?

TWIKE sells the only human-electric hybrid currently mass-produced: vehicle number 1000 recently rolled off the assembly line. We visited the factory to get the answers to the existential questions regarding the future of human power in hybrid vehicles: 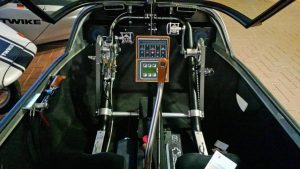 TWIKE met its market for the first time at the 1986 Vancouver World Expo, winning the „functionality award“ for best ergonomic design in the innovative vehicle design competition. The unique joystick control keeps legroom free for pedaling as the driver „floats“ over the roadway on the single front wheel, earning TWIKE drivers the nickname „pilots“. The company offers a training course, TWIKE to Fly, in which potential customers or adventurous vacationers can earn a TWIKE driver’s license qualifying them to rent a TWIKE. 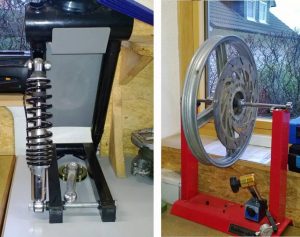 The TWIKE was developed and produced initially in Switzerland, but production moved to Germany after the initial TWIKE investors became insolvent (2002) and a group of German importers joined together to purchase the equipment and continue TWIKE production under the company FINE Mobile. 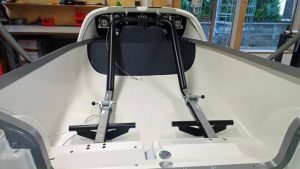 TWIKE lucked out a bit by adopting Luran-S for the body material. BASF was pitching the plastic for automotive applications due to the fact that it can be recycled to material of equal value to the starting plastic (no downcycling). It turns out the material has weathered the years well, proving highly UV-resistant so that even unpainted older models look as good as new. 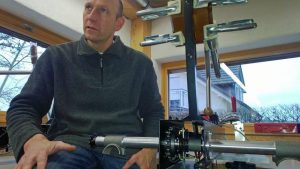 At the TWIKE factory, a group of dedicated individuals work at fulfilling a vision more than merely running a business. The person with whom we had contact was Wolfgang Möscheid, who (dare I say?) could be called the spiritual leader at TWIKE. A man who believes in what he does, the energy and conviction he contributes to TWIKE adds soul to the company, and animates him as he explains the pedal power concept used by TWIKE. 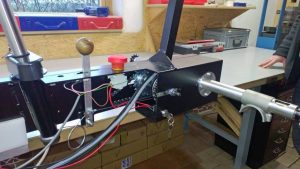 Although there is talk of changing to a pedal-powered generator in future versions, the current TWIKE relies on direct drive pedal power. That means when you pedal, you feel connected to the motion of your vehicle, a motive force rather than a mere passenger.

But that feeling hides a dangerous illusion. This is no bike. Even two people could barely move it by pedal power alone. And as the TWIKE picks up speed in EV mode, you have to pedal harder to feel as though you are not spinning in the air. At such speeds, eventually you will break a sweat, requiring you to give up your precious gain in energy by turning on a ventilator fan to keep the windshield from fogging up.

TWIKE ventilators have recently been upgraded, newer on right.

In fact, Möscheid enthuses that the best way to drive a TWIKE is to pedal just below a sweat-inducing speed. In the city, where cars can move barely faster than bicycle speed, the TWIKE finds its element. Driver and passenger arrive at their destination exhilarated but not stinky; range extends to up to 200 km (124 miles) at such lower speeds.

Even if your commute currently covers miles of highway, changing to a slower alternative route more optimized for the TWIKE could bring you to your desk filled with the joy of a peaceful cruise away from the rush hour madness.

Faster speeds quickly drain the batteries, but that has not stopped TWIKEs on tours. Whether out of desire to prove this new sustainable transportation concept, or purely for the love of travel, TWIKE aficionados have cruised high and low in their three-wheelers. A top speed of 85 km/h (55 mph) enables the TWIKE to take to the highway, although the road less traveled will always be the preferred route. By pedaling, the touring range can be increased from 5 to 20%, the perfect road game for those with a hypermiler inclination.

Möscheid explains how he uses the LEMnet to identify recharge points along his planned route. He looks for a refueling point about every 125 km (75 miles) for a sufficient safety net to ensure the TWIKE does not run out of power in the still sparse landscape of EV-charging opportunities.

Of Fitness and Efficiency

TWIKE lacks a lot of the convenience of the modern car. Sure you get to sit side-by-side with a passenger, and a small amount of cargo can be stowed behind the seats in the battery compartment. Sure you can drive fast enough to take even the famous German autobahn. But when you start to consider that a pretty stripped TWIKE, unpainted but with a full load of 5 Li-Ion battery packs, will lighten your wallet by almost €40,000, you need to get creative with the cost accounting. 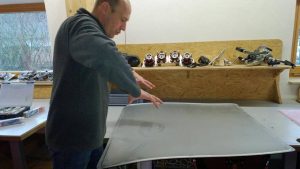 Of course, you are paying for most of the fuel costs of the vehicle life cycle up front. Almost half the price comes from the Lithium ion battery packs alone. The batteries are expensive, true, but you get what you pay for: the battery quality ensures a long life with consistent performance and stable recharge cycles, guaranteed. The Lithium Ion battery packs can also be augmented as you can afford them, unlike Nickel cadmium battery packs. You could save €10,000 on initial purchase price by starting out with the minimum set of 2 LiIon battery packs.

A true hypermiler could keep the energy use as low as 4kWh per 100 km (62 miles), the lower end of the rated 4 – 8 kWh/100 km which equates to approximately €1-2 per 100 km at the mid-2012 average household cost of electricity in Germany. Over 100,000 km (62,000 miles), savings of over €10,000 euros could be realized (assuming 7L/100km or 34mpg. Of course, gas in Europe costs over $8/gallon, so the benefit of a TWIKE in America would be less.) Add a few pennies to the „entertainment“ column of the budget sheet; after all, how much will you save on amusement parks while „flying“ your TWIKE through the countryside?

Also, with not too much creativity, you can calculate in a cost benefit for the extra years of health to be enjoyed due to the fitness factor. Driving a TWIKE could also help fight those extra pounds, with a small proviso: in one of many forthright explanations we received at the factory, Möscheid reminds of the discipline needed to avoid snacking during recharging breaks while on tour.

TWIKE in the Era of Tesla

TWIKEs have established their credentials in such competitions as the World Advanced Vehicle Expedition (WAVE) rally from Genoa (Italy) to Amsterdam (The Netherlands) in 2012, where TWIKE tied with a Tesla for 1st place (and TWIKE team 2 took 2nd). A newer development of the TWIKE, the TW4XP, cruised to a respectable third place in the Progressive Automotive X Prize.

So will human-electric hybrids someday be as commonplace in traffic as bikes and scooters? Logically, it makes perfect sense: fitness, efficiency, sustainability…all in one tidy transportation package. But then reality seeps back in at the edges of the dream: Bikes and scooters cost a heckuva lot less than a TWIKE. Just how peeved will the drivers stuck behind a hypermiling TWIKE be? And where will the dog sit?

In the end, we predict that most people will stick with what they know. As electric vehicles increase in popularity, they will replace fossil-fuel vehicles one for one; there will be no new vision, no new ground-up infrastructure design that enables the dream pioneered at TWIKE. But for the few, the adventurous, the committed fans, TWIKE offers a truly unique mode of transport. Twenty years of development have produced a gem of a design that offers a thrilling joystick-controlled glide through the countryside, which will help TWIKE remain strong in the human-electric hybrid niche market. 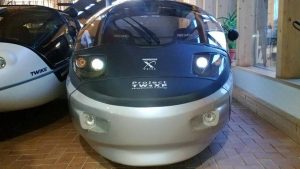 TW4XP: TWIKE 4 the X-Prize, a preview of the next generation?